Before Tutty had seen the news himself the messages had begun, “Isn’t that against the open meetings law? Tutty’s friend Lou implored.  “How can 14 county board members get together and sign a letter without telling us first”? Jackie wanted to know.  Todd asked if he should file a complaint with the Illinois Attorney General’s Public Access Counselor Sarah Pratt, who oversees such things as compliance with the Illinois Open Meetings Act.

These queries were in regards to the letter 14 members of the Stephenson County Board drafted and sent to Illinois Governor, J.B. Pritzker to “request the immediate rescission of the COVID-19 stay-at-home order…”.  News of the letter broke on Wednesday just past.

The Illinois Open Meetings act (5 ILCS 120/) does require all deliberations of public bodies to be held in the open with sufficient public notice.  In order for a meeting to take place there must be a majority of a quorum of the public body.  Because the Stephenson County Board has 22 members a quorum would be 12 and a majority of that would be seven, so seven county board members would make a meeting.

Another problem is that if the letter is determined to be a meeting than you also have a meeting of seven of the county board’s sub-committees, the Administration; Court Services; Finance and Procurement; Nursing Center; Planning and Development; Public Property and Safety as well as the  Public Works committee all had at least three members sign the letter to Governor Pritzker.  Three is a majority of a quorum on these seven member committees.

Apparently, not a single one of the 14 board members even thought about this action being construed as a possible violation of the Open Meetings Act, which does provide a criminal penalty of a Class C misdemeanor.  But even absent the law, how proper is it for a majority of any elected body to be discussing public business–going so far as to draw conclusions about what’s best for their constituent–outside of legal meetings set aside for such purpose?

This letter is very problematic in that it is solid testament that a majority of the Stephenson County Board believe it is somehow acceptable to work behind closed doors on our purported behalf.  This is exactly the type of behavior the Illinois Open Meetings Act is designed to prevent.   There is no excuse that  Scott Helms, a long time Freeport City Council member and now county board member–with a spouse that is the Stephenson County Treasurer no less–has such little grasp of proper public deliberation.  How many other times has the county board deliberated in secret, perhaps reaching a consensus before the public meeting, thereby denying citizens’ rights to not only be privy to the discussion but to weigh in on the decision as well.  Clearly, an open letter to the governor is not something that can be legally discussed in closed session, such decisions must be made in the sunlight.

Another problem, does the signatures of a majority of the Stephenson County Board on a single document make this letter an official act of the board which can only be undone by further board action or lawsuit?  Why, or why not/  Clearly, before being so cavalier, these county board members would have been well served to discuss this letter with the State’s Attorney or Clerk and Recorder.  Tutty knows that there is expertise within Stephenson County which more often than not exceeds that of board members.  In most cases, board members are not qualified to answer Tutty’s questions.  They are not attorneys and they are not the keeper of records.

In a public conversation with State Representative Andrew Chesney, one of the letter’s signers, county board member Andy Shroeder said, “I was one of the 14 members of the board that signed this letter that went to Governor Pritzker and I just want to be very clear that any comments I make about that are my own, I certainly don’t represent that I speak for the other 13 members of the board that signed it so I want to be clear about that.”

If Mr. Shroeder only wants to speak for himself why did he use Stephenson County letterhead for the press release?  To draw attention?  Or to fool the less informed in the media and the pubic into thinking it was an official act of the board?  Here is a picture of the press release: 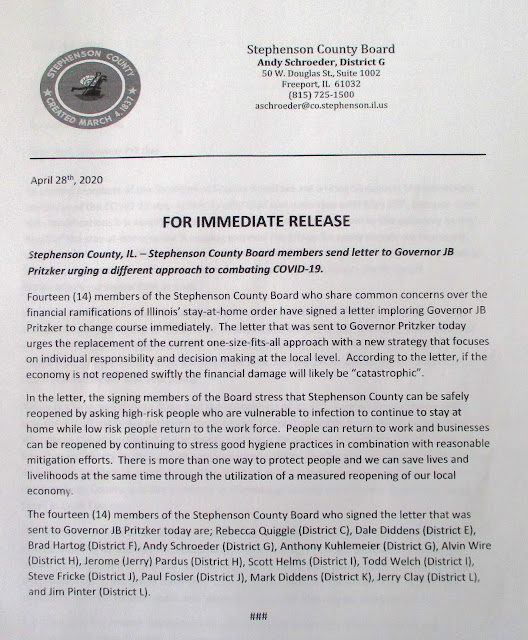 How is it proper or ethical to use the county seal and the return address of the county administrator on anything less than official Stephenson County Business?  Does Mr. Shroeder make this a habit?  Perhaps Mr Shroeder should have used the letter head and return address of his employer, the Freeport Police Department.  I doubt that would go over very well with Chief of Police Matt Summers. Tutty understands Chief Summers puts a very high value on integrity.

One last thing, these board members have professionals at their disposal.  A health department administrator, an emergency management coordinator and a county administrator yet none of these people are cited in the letter which very much involves the health and safety of all Stephenson County residents.

Tutty was going to take the letter apart paragraph by paragraph as Mr. Shroeder in his Facebook Live conversation urged everyone to read the letter and said he wanted to, “dispel any myths about that letter because I think nuance is important and if you’re not reading the whole letter you are missing a lot of the nuance that’s in it.”

I think it is disingenuous for Mr. Shroeder to stress how he speaks for himself when he is part of  known coalition of Stephenson County Board members that are comfortable going outside the confines of legal meetings to not only form a majority behind closed doors but to take an action which could affect all Stephenson County residents, without residents having any knowledge until after the fact.

I’d like someone to explain how this is proper behavior of any Illinois unit of local government?  Tutty’s all ears.

As always, yours in honesty Tutty Baker  tutty.baker@gmail.com

This article was originally published on Tutty’s Town.

One thought on “Questions arise about the letter 14 members of the Stephenson County Board drafted and sent to Illinois Governor, J.B. Pritzker”